History of the Sudan

Sudan has played a notable role in world history as early as the dawn of history. References to Nubia, the cradle of African/mankind civilization were commonly made in ancient human documentation including the works of Greek, Roman authors and Christian scriptures. Moreover, recent excavations in the Sudan showed a sophisticated and original culture revealing that Nubia could have been the cradle of African civilization. This supports the conviction that has been building among scholars during the past twenty years that the Nubians were the creators of an ancient and impressive series of overlapping civilizations, with a homegrown culture that may have been the most complex in all Africa. Archaeologists have found, in recent discoveries, exquisite ceramic figurines, bowls and funerary objects at sites that date from at least 8000 B.C. when people of a Neolithic culture had settled into a sedentary way of life in fortified mud-brick villages, where they supplemented hunting and fishing on the Nile with grain gathering and cattle herding. During the fifth millennium BC migrations from the drying Sahara brought Neolithic people into the Nile Valley along with agriculture.

Discoveries also revealed that in the early Eighth century BC, the Nubian kingdom of Kush emerged as an independent kingdom ruled from Napata by a line of monarchs, sometimes described as the Black Pharaohs, who extended their influence into Egypt. Around 750 BC, a Kushite king called Kashta conquered Upper Egypt and became ruler of Thebes until approximately 740 BC. His successor, Piankhy, subdued the delta, and conquered Egypt, thus initiating the Twenty-fifth Dynasty, and founded a line of kings who ruled Kush and Thebes for about a hundred years. The dynasty's interference with the Assyrian sphere of influence in the Near East caused a confrontation between Egypt and the powerful Assyrian Empire. Taharqa (688-663 BC), the last Kushite pharaoh, was driven out of the Near East by the Assyrian Emperors. Taharqa retreated back to Nubia, and native Egyptian princes were installed by the Assyrians as vassals of Esarhaddon. However, Taharqa was able to return some years later and wrest back control of a part of Egypt. Tanutamun, the successor of Tahaqa attempted to regain Egypt. He successfully defeated Necho I, the puppet ruler installed by Ashurbanipal, and took back Thebes. The Assyrians then sent a powerful army southwards that sacked Thebes to such an extent it never truly recovered. A native ruler, Psammetichus I was placed on the throne, as a vassal of Ashurbanipal, thus ending the Nubian Kushite Empire. 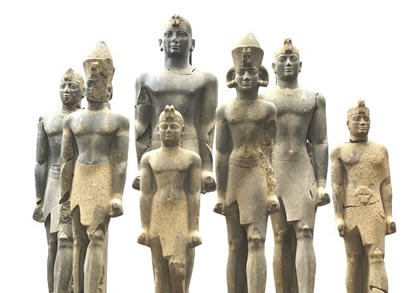 Around 590 BC, the Kushite court, to avoid Egyptian attacks moved to a more secure location further south at Meroe near the Sixth Cataract. For several centuries thereafter, the Meroitic kingdom developed independently of Egyptian influence and domination. During the height of its power in the 2nd and 3rd centuries BC, Meroe extended over a region from the third cataract in the north to Soba, near present-day Khartoum, in the south. An Egyptian influenced pharaonic tradition persisted among a line of rulers at Meroe, who erected pyramids for their tombs. Objects and ruins of palaces, temples, and baths at Meroe attest to a centralized political system that employed artisans' skills and commanded the labour of a large work force. A well-managed irrigation system allowed the area to support a higher population density. By the first century BC, the use of hieroglyphs gave way to a Meroitic script that adapted the Egyptian writing system to an indigenous, Nubian-related language spoken by the region's people.

By the 6th century, three states, Nobatia, Muqurra and Alawa, emerged as political and cultural heirs of the Meroitic kingdom. Around 540 AD Nubia converted to Monophysite Christianity that reopened channels to Mediterranean civilization, renewed Nubia's cultural and ideological ties to Egypt, and encouraged literacy. The use of Greek in liturgy eventually gave way to the Nubian language, which was written using an indigenous alphabet that combined elements of the old Meroitic and Coptic scripts.
The Christian Nubian kingdoms, which survived for many centuries, achieved their peak of prosperity and military power in the 9th and 10th centuries AD.

Around the sixteenth century, as a result of the growing importance of Arabic culture and language, used as a medium for commerce, three Islamic kingdoms, with a feudally based economy, were created. The Kingdom of Sinnar (sometimes known as the Kingdom of the Funj) occupied the area of central Sudan, the Darfur Sultanate arose in the west and the Taqali established a state in the Nuba Mountains, before the country was reunified by the Ottoman forces between 1821 and 1881.

In 1881, imam (religious leader) Mohamed Ahmed Al-Mahdi, the father of modern Sudanese nationalism, led the Mahdist Revolution. Elmahdia (the Mahdist Revolution) can be regarded as the first nationalist movement of modern Sudan. The Mahdi’s forces were able to recuperate the capital Khartoum on 26 January 1885. But he died five months later in June 1885. His successor Khalifa Abdallahi Eltaayishi, reigned over the Sudan all the period that preceded the Anglo-Khedivial occupation (1885 - 1898).

During the British occupation telegraph and rail lines were extended to link some parts of the country.  Port Sudan opened in 1906, replacing Sawakin as the country's principal outlet to the Red Sea. In 1911 a high-quality cotton scheme was established in Aljazeera, central Sudan, to feed Britain's textile industry. An irrigation dam near Sinnar was completed in 1925. Aljazeera Scheme made cotton the mainstay of the country's economy and turned the region into Sudan's most densely populated area.

However, British authorities treated the three southern provinces, Equatoria, Upper Nile and Bahr-algazal, (today’s Republic of South Sudan), as a separate region. The Sudan was administered as two separate entities. In 1922 the British passed the Closed Districts Ordinance stipulating permissions on the people of each part to travel to the other. Arabic language and practicing Islam were denied for South Sudanese by the British rulers, whereas western Christian missionaries were encouraged to work, operating schools and medical clinics and providing limited social services in southern Sudan. Roman Catholic, American and Anglican missions maintained separate areas of influence in the south to avoid competition. The southern provinces were prepared for integration with British East Africa.

Moderate Sudanese revolts, inspired by the Mahdist movement, marked the early years of the British rule in the Sudan during the period 1900-1905. In 1921, Ali Abdelafif, a former army officer, founded the United Tribes Society that called for an independent Sudan. He later established the White Flag League that organized demonstrations in Khartoum. Abdelatif's arrest and subsequent exile in Egypt sparked a mutiny by a Sudanese army battalion. These events are recalled as the Revolution of 1924. (Dr. Yoshiko Kurita, professor at Chiba University, Japan, has magnificently elaborated the story of Ali Abdelatif in a book published in both Arabic and English versions).

In 1942 the Graduates' General Conference, a quasi-nationalist movement formed by educated Sudanese, presented the government with a memorandum that demanded a pledge of self-determination after the war to be preceded by abolition of the Closed Districts Ordinance, an end to the separate curriculum in southern schools, and an increase in the number of Sudanese in the civil service.
In 1948, Britain authorized a partially elected consultative Legislative Assembly with an executive council consisting of five British and seven Sudanese members. In 1952, the Legislative Assembly negotiated the Self-Determination Agreement with Britain. The legislators then enacted a constitution that provided for a prime minister and council of ministers responsible to a bicameral parliament. The new Sudanese government would have responsibility in all areas except military and foreign affairs, which remained in the British governor general's hands.

The transitional period toward independence began with the inauguration of the first parliament in 1954. On 19 December 1955 the Sudanese parliament, unilaterally and unanimously, declared Sudan's independence. The British Government recognized the independence of Sudan on 1 January 1956.

In 1958, following a period of economic difficulties and political manoeuvring that paralyzed public administration, Chief of Staff Major General Ibrahim Abboud overthrew the parliamentary regime in a bloodless coup d'état. He was forced by the first Sudanese popular uprising (October Revolution) in October 1964 to step down.

Sudan enjoyed a second parliamentary period between 1965 and 1969. A second coup d'état that took place on May 25, 1969 abolishing parliament, outlawing all political parties and establishing a single-party system similar to the them common totalitarian regimes in Africa and the Arab world.

In 1972, the Addis Ababa Agreement led to a cessation of the war between the central government and the rebellion in south Sudan before it erupted again in 1983.

On the ninth of January 2005 the Comprehensive Peace agreement CPA was signed in Nairobi, Kenya between the government of the Sudan and the rebellion of south Sudan. As stipulated in the agreement South Sudan enjoyed an autonomous regional government and a considerable share of the portfolios of the “National Unity” central government during the period 2005-2011. Oil Revenues were shared evenly between north and south. In January 2011 South Sudan voted overwhelmingly for secession. On July 9, 2011 South Sudan became an independent sovereign country.

In 2010, shortly prior to the referendum on South Sudan, general elections were held. President Omer Hassan Ahmed Elbashir won the presidency of the Republic of the Sudan with 6,901,694 votes (68.24 %). Mr. Yasir Saeed Arman, unofficial candidate of SPLM, rankied second with 2.193.820 (21.69%). In the then semi-autonomous South Sudan President Silva Kiir Myardit won, the presidency of the government of South Sudan with 92.99 %. The National Congress Party overwhelmingly won the legislative elections.
On January 27, 2014, President Omer Elbashir launched an unconditional national dialogue process aiming at revising all aspects of political life, making constitutional reforms to pave the way for a free multi-party election in 2015 and to put an end to unrest in South Kordofan, Blue Nile and Darfur areas. The initiative was widely welcome by all political affiliations of the country and is gaining more and more attention from the international community.