Tourism in the land of Sun, Nile, Gold and Black Pharaohs Antiquity

Tourism in the land of Sun, Nile, Gold and Black Pharaohs
Antiquity:

The Sudan, the land of old Nubia, the kingdom of Black Pharaohs, is endowed with many touristic sites and resources. The National Archaeological Museum in the capital Khartoum contains many beautiful ancient Nubian objects, parts of temples rescued by UNESCO and moved from the Lake Nubia area and different sizes statutes of Black Pharaohs. In the north of the Sudan tourists can enjoy, along the charming Nile banks, visiting the sacred Jebel al-Barkal Mountain, and its temple. Tourists can also enjoy the marvellous pyramids of Meroe located at about three kilometres far from the Nile on some hills covered with yellow sand dunes. More than 40 pyramids stand out with their sharp shapes against the clear sky together with some small funerary temples with the walls fully decorated with bas-reliefs. The archaeological site of Musawwarat, the temple of Apademak and the Roman Kiosk Temple are another testimony of the richness of the Sudan's ancient history. 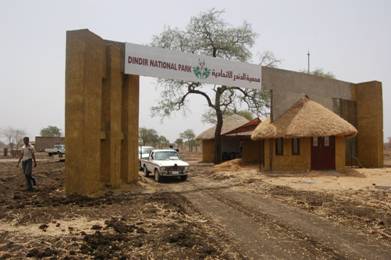 Dinder National Park is a natural biosphere reserve in eastern Sudan, near the Sudanese border with Ethiopia. Dinder lies approximately 280 miles southeast of Khartoum, between two tributaries of the Blue Nile called the Dinder and Rahad Rivers. Dinder was established as a park in 1935 and designated in 1979 a member of the World Network of Biosphere Reserves. In 1983 the park was extended 2,630 km2 (1,020 sq mi) towards the west. The park is home to species of large mammals, birds, fish, bats, reptiles, and amphibians, including lions, African elephants, black rhinoceros, hippopotamus, crocodiles, giraffes, gazelles, hartebeests, reedbucks, roan antelopes, bushbucks, oribis, waterbucks, greater kudus, buffalos, leopards, cheetahs, hyenas, baboons, jackals, and ostriches. Moreover, Dinder National Park has a high level of biodiversity of many species, some of which are listed as endangered or vulnerable or threatened species.
The park is in a major flyway used by birds migrating between Eurasia and Africa. Vegetation in the park consists of thorn-bush savanna in the north and woodland in the south; along the riverbanks there are palm or gallery forests and swampy areas.
The park can be reached by road from Khartoum where, normally trips and excursions are arranged from the park headquarters.

On the other hand, the Red Sea coast, gulfs and coral reefs, which extends for more than 700 km, provides tourists with opportunities for diving, underwater photography, boating and water skiing.
The Capital Khartoum
Khartoum, the capital of the Sudan, is located at the confluence of the White Nile flowing north from Lake Victoria in Uganda and the Blue Nile flowing west from Ethiopia. The confluence of the two Niles, known as "al-Mogran", demonstrates a beautiful phenomenon where people can observe the difference between the colours of the two waters. The confluence area changes from one side to the other depending on the strength of the flow of water of each river. The main Nile continues to flow north towards Egypt and the Mediterranean Sea. Visitors of Khartoum can, also, enjoy visiting the National Museum, the Mahdi Tomb, the beautiful scenery along the banks of the Nile, the traditional markets, handicrafts exhibitions and markets, etc. Cruises are also commonly organized on the Nile.

Apart from tourists, tourism industry in the Sudan is still largely opened for foreign investors. Foreign investors are induced to contribute in many infrastructural projects including camps, villages, hotels, etc.
Several video materials and information about the park can be reached through the internet.
Useful links: