The Republic of the Sudan is situated in North East Africa. The country was the largest African country before the secession of South Sudan. Now it ranks third after Algeria and DR Congo and sixteenth at world level. It shares common borders with seven countries – Central African Republic, Chad, Egypt, Eritrea, Ethiopia, Libya, South Sudan and the Kingdom of Saudi Arabia across the Red Sea. Sudan has an area of 1,861,484 sq km, with generally flat plains and a coastline of 875 km.

Khartoum, the capital of the Sudan lies at the confluence of two great rivers, the Blue Nile and the White Nile. 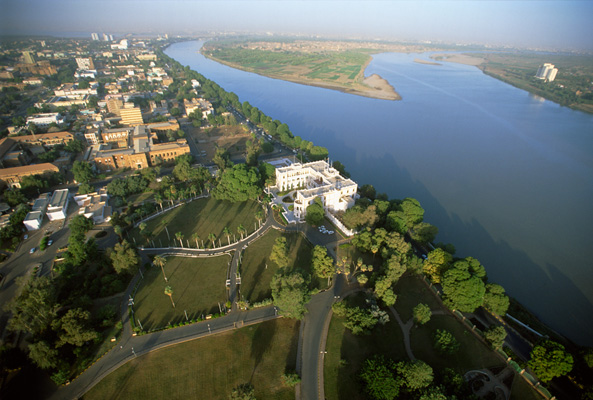 
Sudan lies within the African tropical zone. Its climate varies from rainy Savanna in the south, continental in the northern parts and Mediterranean in the eastern areas. From October to March temperatures range between 16 to 30 degrees, with beautiful warm sunshine during daytime hours. Rains fall normally between May and August. 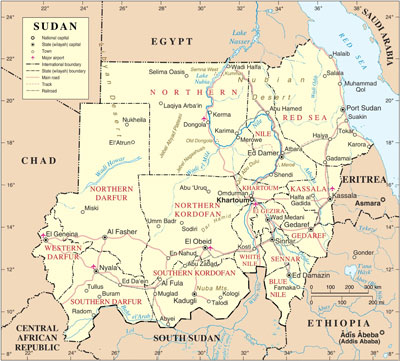 
The Sudan was a melting pot for the three major indigenous groups, the Nubian, Beja and Fur, with various other ethnic groups, which settled or migrated to the Sudan in different historical eras. It is also true to note that the Sudanese are largely descendants of an Afro-Arab/Semitic origin. The population of Sudan is estimated to reach 35 million. Although, Arabic is the Sudan’s lingua franca, Sudanese people speak a variety of local indigenous dialects. English is widely used and spoken as second language.

The Sudan has, so far, used only 40 million acres of its arable land that exceeds 200 million acres. 11 million acres are irrigated and 29 million acres are rain-fed. More water is abundant in the River Nile and its tributaries, the Sudan's most precious natural endowment. Rainwater, estimated at 1000 billion cubic meters per year, has not yet been adequately used while huge reserves of underground subterranean water remain to be explored. Efficient use of these available water resources requires the development of appropriate irrigation technologies and information on efficient irrigation methods, determination of crop water requirements, irrigation intervals and all other water harvesting techniques to serve the country's new strategy for agricultural expansion called the Agricultural Revival/Renaissance ( AL-NAHDA ALZIRRAYIA). These programmes may serve as well in preserving the environment, enhancing the situation of food security, alleviating poverty and even combating desertification in some semi desert areas, goals boldly targeted in international agendas destined for the developing countries.

In recent years, encouraged by the success of the oil exploration activities, the economic liberalization policies, the strategic location of the country, the reasonably developed infrastructure, the advancement in the communication network and the adoption of new investment encouraging laws, a noticeable increase has been noticed in the direct foreign investment in the Sudan.  The investment reforms include preferential treatment for foreign investors, exempting capital goods from VAT and customs, lowering the corporate tax rate and improving the timeliness of customs clearances. The newly adopted National Investment Encouragement 2013 Act centralizes the allocation of land on the hand of the National Investment Authority avoiding duplication with regional states authorities. Articles 40 and 41 of the act establish new especial courts for investments disputes.

In 1958, following a period of economic difficulties and political manoeuvring that paralyzed public administration, Chief of Staff Major General Ibrahim Abboud overthrew the parliamentary regime in a bloodless coup d'état. He was forced by the first Sudanese popular uprising (October Revolution) in October 1964 to step down.

Sudan enjoyed a second parliamentary period between 1965 and 1969. A second coup d'état that took place on May 25, 1969 abolishing parliament, outlawing all political parties and establishing a single-party system similar to the them common totalitarian regimes in Africa and the Arab world.

In 1972, the Addis Ababa Agreement led to a cessation of the war between the central government and the rebellion in south Sudan before it erupted again in 1983.

On the ninth of January 2005 the Comprehensive Peace agreement CPA was signed in Nairobi, Kenya between the government of the Sudan and the rebellion of south Sudan. As stipulated in the agreement South Sudan enjoyed an autonomous regional government and a considerable share of the portfolios of the “National Unity” central government during the period 2005-2011. Oil Revenues were shared evenly between north and south. In January 2011 South Sudan voted overwhelmingly for secession. On July 9, 2011 South Sudan became an independent sovereign country.

In 2010, shortly prior to the referendum on South Sudan, general elections were held. President Omer Hassan Ahmed Elbashir won the presidency of the Republic of the Sudan with 6,901,694 votes (68.24 %). Mr. Yasir Saeed Arman, unofficial candidate of SPLM, ranked second with 2.193.820 (21.69%). In the then semi-autonomous South Sudan President Silva Kiir Myardit won, the presidency of the government of South Sudan with 92.99 %. The National Congress Party overwhelmingly won the legislative elections.

On January 27, 2014, President Omer Elbashir launched an unconditional national dialogue process aiming at revising all aspects of political life, making constitutional reforms to pave the way for a free multi-party election in 2015 and to put an end to unrest in South Kordofan, Blue Nile and Darfur areas. The initiative was widely welcome by all political affiliations of the country and is gaining more and more attention from the international community.