Message of the Ambassador 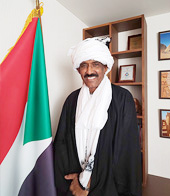 In commencement, it is my great honour to extend my heartfelt and respectful greetings combined with my best wishes to Their Imperial Majesties Emperor Naruhito and Empress Masako, the Imperial Family, and the friendly people of Japan on the occasion of the New Year, 2021.

Moreover, I would like to avail myself of this opportunity to congratulate His Excellency Mr. Yoshihide Suga, the Prime Minister of Japan, and his cabinet wishing them every success in their endeavours.

I would like also, on my behalf and on behalf of my colleagues in the Embassy to felicitate our compatriots of the Sudanese community in Japan on this auspicious occasion and on the occasion of the 1st of January that marked the 65th anniversary of the independence of the Republic of the Sudan after a long courageous struggle through generations

The Sudanese national spirit continue to express itself in the glorious popular revolution of December 2018 (December 19th 2018 to April 11th 2019) which culminated in the downfall of the autocratic regime that ruled the country for three decades and consequently, the signature of the constitutional document that led to the establishment of the transitional civilian-led government in August 17th 2019.

The year 2020 witnessed two tremendous achievements by the transitional government, both are long-awaited goals for the Sudanese. One is the signing of Juba Peace Agreement between the transitional government and Sudan Revolutionary Front on October 3rd, and the second is the removal of the Sudan from the US list of states sponsoring terrorism as from the 14th of November 2020 in conclusion of long series of bilateral negotiations. Both achievements are very crucial for the revival of the economy, sustainability of development and stability within Sudan and the whole region.


The Sudan is considered to be one of the richest African countries in terms of its untapped natural resources that provide seductive opportunities for foreign investors, e.g. flat arable land of about 80 million hectares with adequate water resources for irrigations, livestock, wildlife, forestry minerals including gold, copper, chromium and other precious metals.


The Sudan with its unique location at the cross-roads between west and east Africa, overlooking the Red Sea, and incubating the longest portion of the Nile River became a cradle of different civilizations along history at different stages since the 7th century BC, eg. Kerma Culture, the Nubian black pharaohs kingdoms, Kush Neptla and Meroe, the Christian kingdoms, the Mahdist state and the Sultanates of Darfur and Sinnar. Thus, tourist can find an irresistible attraction in the marvelous historical monuments (pyramid temples, statues, etc.) as well as the enjoyment in the natural endowments such as the site of the Capital Khartoum at the confluence of the White and the Blue Niles.


The charming green banks of the Nile through the desert up to the Egyptian borders and the Nile’s cataracts. On the other hand, the Red Sea Coast, gulfs and coral reef which extended for more than 700km, provide tourist with opportunities for diving and underwater photography, boating and water skiing.


The Sudan and Japan are maintaining friendly and cordial relations since late fifties and are following excellent level of coordination at different international forums and both countries are exerting considerable efforts to promote economic, social and cultural exchange and widening the scope of cooperation economically and politically.


In concluding my remarks on the occasion of the 65th anniversary of our Independence Day, I would like to express on behalf of the people of the Sudan and the Government of the Sudan, our deep gratitude and appreciation for Japan for its active participation as a member of the friends of the Sudan in all discussions and activities of the group designed for Sudan assistance, and for its prompt response of Japan to the natural crisis faced by Sudan this year. Sincere thanks and recognition for the valuable assistance Japan has been offering to my country.


The people of Japan, the Ministry of Foreign Affairs, The Japan International Cooperation Agency (JICA), Japan External Trade organizations and my counterpart, H.E. Mr. T. Hattori, Ambassador Extraordinary and Plenipotentiary of Japan to the Republic of the Sudan and his colleagues deserve special acknowledgement, wishing them all a happy and prosperous 2021.


YAHIA ABDELGALIL MAHMOUD KHALIL
Ambassador of the Republic of the Sudan